We revived The Guild's Company and built a website more fitting for Tulsa, Oklahoma's Number One Commercial Real Estate Broker.

Our goals for the project were to build a prestigious website that reflected the company, drive traffic to the website and build more awareness of Rick's personal brand. Finally, we wanted to increase the breadth of Rick's customer base, and tailor the site to look good to companies from any industry. 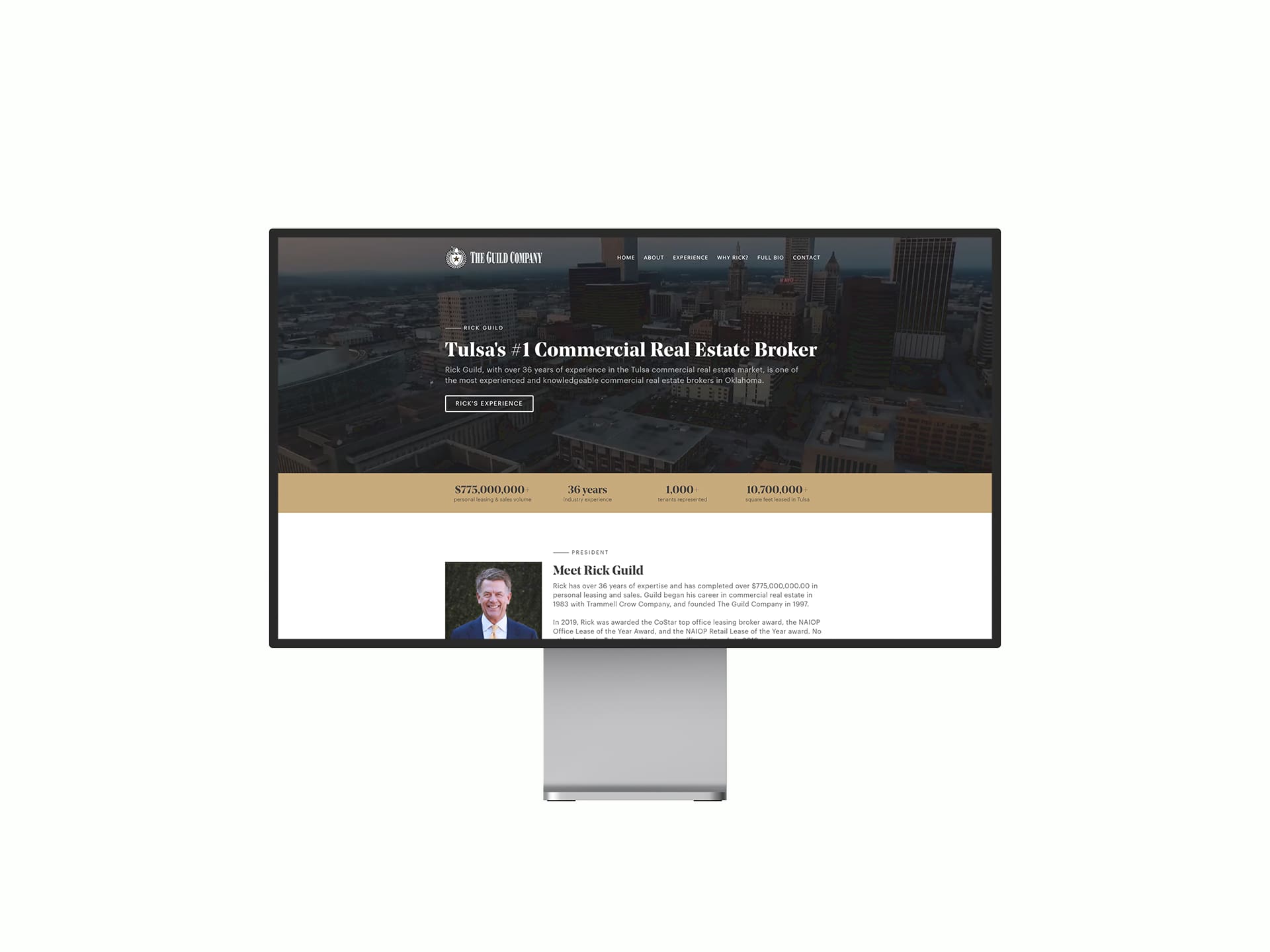 We called Rick one more time before starting the site to get some more specifics out of the way. Following that call, we knew we had a lot on our plate, especially if we were trying to complete the project as quickly as possible.

I mean, just take a look at Rick's website before we overhauled it:

It's safe to say that we had our work cut out for us from the start. It was time to get our hands dirty, starting by

Our next order of business was to create a new color palette. Rick's old green and gold palette makes us want to barf, so we decided to get rid of it and replace it with a gold and black color scheme. Ahhh, much better. However, once we were ready to start designing a new logo for Rick, we experienced a bit of an issue. Rick's logo has lots of sentimental value, and he requested we not touch it, so instead of modifying the shape, we decided to preserve it while applying the black/gold theme to the logo, giving it a modern refresh.

After refreshing the brand, we started building the site. Real Estate is a business that's heavily focused on numbers and results, so we wanted that to be the center of the website.

Below the header, we highlighted several of Rick's most impressive numbers within a gold banner and peppered the rest of the site with other relevant information. We even loaded up one page with every single deal.

We wanted to differentiate from The Guild Company's sterile and boring competitors, so we added a hero playing a video of Tulsa from the skies, increasing the uniqueness and personality of the website.

For typography, we opted for 'Noe Display,' a serif font with elegance and personality, to differentiate the website from the boring sans-serif and plain serif fonts of the competitors' sites.

Rick was incredibly responsive throughout the process, which meant things were able to get done quite a bit faster than normal.

Originally, the site wasn't mobile responsive. When viewing Rick's old website on a mobile device, the fonts were small, hard to read, and key elements like links and buttons were impossible to click.

At the time, The Guild Company was getting no business on their website, which could in part be due to the fact it wasn't responsive and didn't present a good user experience.

We decided to change that by building a beautiful, mobile version of the site using large fonts, easily clickable buttons, and a beautiful content focused design. We also built an elegant mobile menu that animates on open and close. At Element Six Design, all of our sites are built mobile responsive, regardless of budget or timeframe.

In the footer, you'll find a heap of information about the business that wasn't there before, including an interactive Google Maps element that allows users to navigate directly to The Guild Company's office–from the footer!

Finally, we finished The Guild Company's website, and in record time: 8 days. Due to Rick's responsiveness and clear communications between both parties, we were able to finish the website in under two weeks.

If you're interested in building a website of your own, don't hesitate to reach out by contacting us at +1 (405) 509-5494, or by emailing hello@carboncreative.io. Alternatively, you can click the link below to get started. We look forward to working with you to build a beautiful, responsive web design!

Let's create something amazing together.